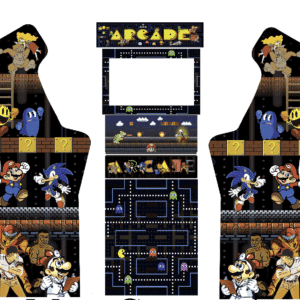 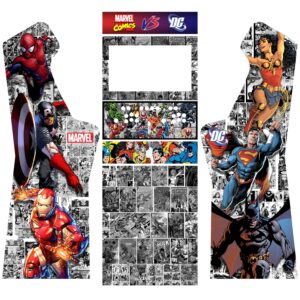 We print with sufficient bleed to account for any small miss measurements, and angles. In short, you stick them on, and then use the current wood as a trim guide. Cut with an exacto, or small box cutter to cut them down to size once stuck to the cabinet. We have found this is a much easier process than pre-cutting it and trying to align everything perfectly, because you really only get one try.

An arcade fighting game developed by Rare and published by Midway. Initially released in arcades in 1994, the game advertised it would launch in 1995 for an intended “Nintendo Ultra 64” home console. The Ultra 64 eventually materialized as the Nintendo 64, but never received a version of the original Killer Instinct. Instead, the game received a high-profile launch on the SNES which bundled a CD of remixed game tracks with a limited edition black-colored cartridge, as well as a release on the Game Boy handheld the following year. Both the SNES and Game Boy versions were published by Nintendo. A digital port, titled Killer Instinct Classic, was released as part of a bundle with its 2013 sequel’s first season on Xbox One.

A 1996 arcade-only game developed by Rare, licensed by Nintendo, and manufactured by Midway. It was the sequel to Killer Instinct. The game was also ported to the SNES, but never released.[1] Like its predecessor, the game features two 8-way joysticks with six buttons each for attacks (three punches and three kicks), allowing for both a single player mode or a two player versus mode. It was later ported to the Nintendo 64 console under the name Killer Instinct Gold, and the port was published by Nintendo. A digital port, titled Killer Instinct 2 Classic, was released as part of a bundle with its 2013 sequel’s second season on Xbox One. Killer Instinct Gold was also included as part of the Rare Replay compilation release.

Killer Instinct is a fighting game featuring one-on-one combat. The game borrows the attack set of Street Fighter and is also inspired by the finishing moves from Mortal Kombat.[7]

There are also several features that distinguish it from other franchises: